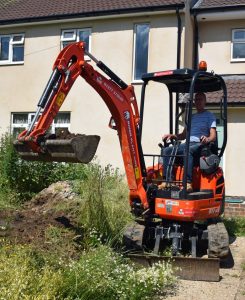 A square in the centre of Basildon is about to undergo a series of improvements as part of a multi-million pound scheme.

St Martin’s Square, which is located in the west of the town centre and currently houses everything from the Towngate Theatre to the Basildon Council offices, will be regenerated as part of the ambitious plans.

The construction firm Thomas Sinden will carry out the work. A wide range of improvements will be made – including a re-paving process, the installation of seats, and changes to the drain system.

In addition, landscaping will be carried out around the site as well as to the greenery around the square’s church of the same name. St Martin’s of Tours Church has been on the site since the 1960s, and is a local landmark.

And an application was submitted to fell some trees as part of the development.

Thomas Sinden sent an independent tree consultant to verify the situation with the trees that were already in place, and later submitted an application to remove them.

With the square about to start playing host to almost fifty stalls at Basildon Market, those behind the project were optimistic about how it will play out. “The works will open the space up, reducing the chance of antisocial behaviour and making St Martin’s Square more visible,” a spokesperson for Basildon Council told the local press.

Funding for the scheme comes from a wide range of sources, including the council itself.

New Leisure Complex To Be Built In Basildon Town Centre

As well as the renovations planned for St Martin’s Square, Basildon Council is also aiming to revolutionise East Square with a brand new all-day leisure facility which truly will have something for all residents of the area.

Under the plans, the new site will have a range of dining options to choose from as well as a multiplex cinema with ten different screens.

Plans hit what appeared to be a standstill late in 2019 when a contractor in the supply chain, Simons Construction, announced that it was going to into administration.

It is not currently clear what the next stage is likely to be.

The history of the project reveals some grand thinking on the part of the council.

Basildon Council announced that architecture firm Pollard Thomas Edwards would be designing the building after the firm was victorious in an architectural competition. Following that, cash to fund the scheme was approved at the end of 2017 and a planning application was submitted in March.

The square is currently comprised of a number of businesses including hair salons, vape lounges and more. And with Grade II-listed building Brooke House located just next door to the site of the proposed new building, the development is also likely to play a role in enhancing the area as a prime public space.

Local politicians are looking forward to the site’s construction. “This development is a great opportunity to boost the local economy and provide new jobs for local people,” said Councillor Alan Ball, Basildon Council’s Chairman of the Regeneration and Environment Committee.

“We want East Square to be a destination of choice rather than convenience and are committed to creating a vibrant town centre with a viable night-time economy,” he added.

At Rhinos Plant Hire, we provide a range of heavy and small plant hire services to both professional and domestic customers across Basildon, Essex and the wider South East.

If you need heavy plant for your construction or home improvement job, we’re able to help. Our range of dumpers, for example, include high lift and swivel tip varieties – so you can select one which matches your needs. We also stock a range of mini diggers with a weight range of 0.8 tonnes for compact environments to eight tonnes for maximum performance.

We also have a variety of smaller plant and tools on offer as well. Our concrete and compaction range, for example, includes tip-up mixers and high frequency pokers, while our cutting and grinding tools include benches, splitters, floor saws and more.

And if you’re not sure exactly what you need, our expert team are on hand to help you find the items you require. Just give us a call today on 01277 372 626 to find out more about how our equipment can help make your construction jobs run smoothly and efficiently.