Call For Barking Riverside Contractors Has Been Made 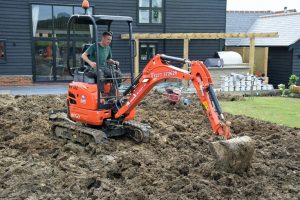 Barking’s all-new Riverside development is continuing apace – with the first stage of many now set to come to an end.

Stage one, which stretched from 2012 to this year, is now coming to a close – while the second stage, a concurrent seven year project, is already underway.

Plans for the project, which has a total value of £1billion, indicate that it will substantially change the landscape of Barking for the better. The plans are ambitious in scale, and the council has permission to build around 10,000 brand new residential units over the next two decades. The size of the land in question is around 400 hectares, and it’s going to be located on the site of the old Barking Power Station.

In addition to the new homes, the site is going to enjoy a wide range of new community features including a range of medical institutions, places of worship to cover all sections of the community, open green spaces, and many more. There’ll also be leisure facilities built to give people the chance to relax by playing sport and enjoying some physical activity, too.

The new development will also get its own train station. Barking Riverside railway station would be part of the London Overground’s existing Gospel Oak to Barking line, and it’s believed that the 1.6 kilometres of new track would be operational by 2021.

It’s believed that four trains per hour would run on the route – and according to Transport for London, a wide range of works are still underway, including the introduction of new tracks and services as well as piling and pier work for the viaduct.

Other New Homes Constructed In Barking

But Barking’s Riverside development isn’t the only local development currently under consideration. There are also plenty of other housing projects on the go here too, and one of them is the Fresh Wharf development.

The development, which plans to convert around ten acres of land into homes, will be ready in around eight years. As well as homes, this River Roding-side development will be just fifteen minutes’ walk away from Barking station for connections into London. Road transport connections are also set to be good, with the A13 located nearby for easy access to all sorts of places such as London City Airport in Newham.

Demolition at the site is now ongoing, and the earliest of the new homes are due to be completed by 2020.

Contractors Countryside and Notting Hill Housing are working on the site, and it’s believed that the project will also include leisure facilities such as shops and eateries.

At Rhinos, we regularly rent out plant both large and small to clients all across Barking and indeed the wider Essex region. We have all sorts of tools available in our collection for clients to hire: those who need smaller tools, for example, can opt for cutting and grinding tools such as saw benches, manual block splitters, floor saws and more, while those who need generators can go for one of our petrol or diesel-powered options.

But if it’s a big job you have planned, it’s likely that you’ll need some of our larger tools. Our skidsteers, for example, are made from top brands like Bobcat and come with all sorts of possible accessories including pallet forks, grapple buckets, sweeper collector brushers and more. Our mini diggers, meanwhile, can be hired in a variety of different sizes ranging from 0.8 tonnes to 8 tonnes – so it’s likely there’ll always be an excavator that’s right for you.